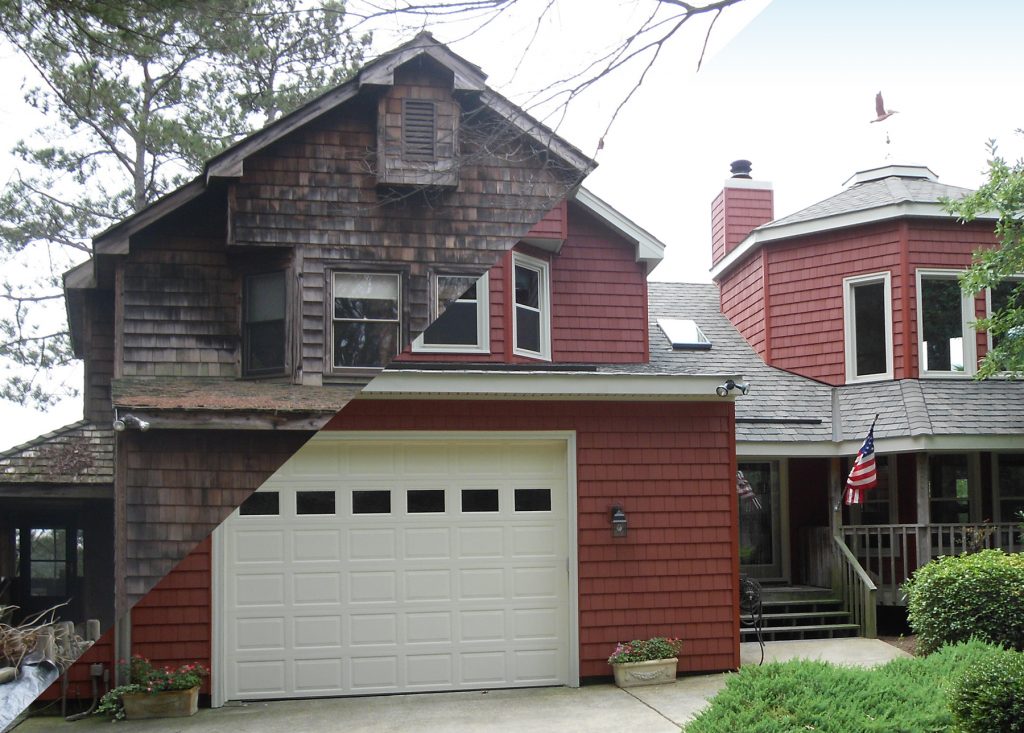 Virginia Beach, Va. homeowner Marsha Wallace was ecstatic at the chance to host the wedding for a very close friend, her fellow musician and bandmate for the last 17 years. She also knew she wanted to revamp her 20-year old house, both for her family and the big celebration that would welcome around 90 guests. In a natural environment that has accelerated the weathering process, Wallace’s home is in swamp country, sited scenically at the convergence of three waterways including the Lynnhaven River, on serene land forested with oak and magnolia. “At high tide we have a beautiful view here and the river nearly surrounds us,” she says.For Wallace, the wedding was a driving factor in the renovation, “but I held off our renovation until I couldn’t put it off anymore, simply because I was apprehensive about finding the right person to trust with our home,” she says.  “In the end, the wedding was great and it was a truly a wonderful day. Everyone was thrilled about the house and happy to see it.”

After a roofing contractor put new architectural roof shingles on the home, K & B Construction, in business since 1985, went to work. It installed a variety of new items including 45 windows and 6 doors, plumbing and lighting fixtures, main level flooring, appliances, cabinetry and a garage door. It also repaired the screened-in back porch and completely resided the entire home, which had originally been done in cedar. “I feel so lucky to have worked with Scott Dickey and his company, K & B. They took great care of us and great care of our home,” Wallace says. “With the updates inside and out, the difference is tremendous. It’s just shy of like having a new house.”

The new siding for Wallace’s home was actually the result of a last-minute change – a positive one that ended up creating a captivating exterior. Knowing that she wanted red siding to complement the touch of red in her new roof along with a continuation of shake style, she had originally agreed on a polypropylene shake product for installation. Wallace recalls how Dickey then brought the late suggestion to use Foundry Split Shake Siding, a premium vinyl shake panel he had used occasionally with accents. “He said ‘I’ve got this new siding consideration – I like the color better, I like the product better. Would you take a look at this for me?’ The price difference was going to be negligible,” Wallace says. “We actually liked it a lot. Scott told us, ‘I haven’t used it extensively, but I’m really excited about it. I think The Foundry’s going to be great to work with here.’ We really loved the Russet siding color and the idea of it working with my roof, so we chose it. My husband Philip really liked The Foundry’s texture more too.”

Throughout the exterior, 27 squares of Foundry were used. Aluminum trim, site-fabricated for custom detail, was used in a contrasting cream  color to add further dimension and vibrancy. “To a person,” notes Wallace, “everyone who has seen the house is amazed when they get up really close and realize it’s vinyl siding. They don’t believe it until they get up really close and examine it. It looks like brand new shake and doesn’t look like your typical siding job at all,” says Wallace. “The Foundry colors were a little more inviting, more appealing,” Dickey agrees. “Also, with its limited lifetime warranty coverage, I realized the protection was better than the warranty with the other product. She loved the color and it worked out really well. Through the siding phase and the entire project, working with the Wallaces was phenomenal. It was such an exciting project for  everybody involved.”

Validating his Foundry suggestion, Dickey says that when you look at the home, the shake really appears to be authentic. “There’s no sheen and the job looks outstanding. The seams are virtually nonexistent. You could search the whole job, but unless you know what you’re looking for, you’re not going to find that seam unless you’re trained. That’s an improvement over other siding I’ve worked with.” With the exterior’s new color and texture, the update lends a Victorian inspiration to the approximately 2,400 sq. ft. home. The siding’s wood-grain authenticity is provided by more than 100 molds of natural cedar used to craft the shake panels. Spanning 40 ft. with no repeat, there’s no evidence of any telltale siding pattern. While Wallace always appreciated the home’s architectural interest, she says the whole form of the house is now enhanced with appealing detail that makes everything “pop.”

In addition to the aesthetic value of the new exterior, there were also matters of maintenance and environment to solve. The old cedar and its necessary upkeep were impractical, as Philip is partially paralyzed. “While the freedom from maintenance is very attractive, says Marsha Wallace, “there’s actually one more reason we wanted to do away with cedar siding.” “We had an honest-to-goodness plague of squirrels. They chewed five holes in the wood fascia board and were in our attic, so we had to do something. With the aluminum trim and vinyl siding, they can’t do that now. It’s been good for a giggle – my smart squirrels climb up the wooden deck posts and try to latch onto the aluminum trim, but they can’t get hold. It’s a lot harder for them to do damage.”

Dickey says he has noticed a big turn from wood to vinyl shake siding. “It has really taken off around here. People making the switch from cedar are just done with having to maintain it; the cracking, checking, warping, splitting. They definitely don’t want that maintenance or upkeep. Once a product like The Foundry is on, it’s done. There’s no painting involved, it looks finished. With a couple washes here and there, it should forever look like it does now.”

For his part, Dickey says The Foundry was terrific to install. “It’s a much easier installation than polypropylene or fiber cement. You don’t have to use a saw, you can just use your snips. The installers are happy – and I get a lot of feedback from my guys on the product,” he says. “With The Foundry, I’ve never had any fade issues, I’ve never had any warranty claims. With some other products I’ve worked with, I’ve experienced all of the above.” The product quality was a sentiment Wallace was also able to hear for herself. “I was home a lot of the time when the guys were working, and several times they told me they loved working with this siding because it was very easy to install, that it went up so well and it was so tight that they could really do a nice job,” Wallace explains. “Throughout the job they were great, asking questions and always answering my questions. I was actually heartbroken when Scott’s guys had to leave,”   she adds. “I had a lot of wonderful, attentive talent here, but I think they also had a great product to work with. I believe that’s made the difference. I’m really pleased with our siding choice.”